Not sure if this is a gross oversight by Apple's WebKit team, or an intentional thing, but there's no way to customize fonts in Safari 6 unless you want to use a CSS stylesheet. You'll see from the screen grab below that there is no "Appearance" tab in which you used to be able to set fonts, sizes, etc. 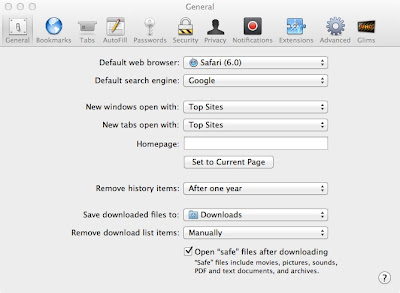 You'll note that as one of the responders points out, Apple still lists it as a feature on the Safari page, bottom right: 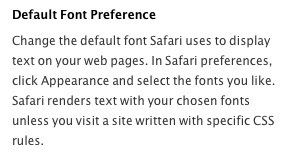 For a lot of folks, being able to set the font to a readable size and style, this is a bad move. Raise your hands if you know how to write a CSS stylesheet to set your font preferences.

I don't know about you, but my eyes are aging. I always took advantage of customizing things via the Appearance pane to make things easier to read.

Yes, zooming the page is there. Even zooming only the text on a page. But that's not the same thing as being able to set a serif font style/size, and a sans-serif style/size.

Let's hope Apple adds it back to Safari.

I agree completely. I particularly hate serif fonts on computer screens. They're fine on printed pages, but unless you have a retina display, are harder to read than san serif fonts.

Me too! I thought my eyes were playing tricks on me that MacSurfer website switch back to Times, I set Lucida Grande.

Customize fonts in Safari after you download TinkerTool. It's free and gives you options to set your own preferences in several ways in Mountain Lion.

I just downloaded TinkerTool from the dev's website and can find nothing about Safari in the preferences.

For the meantime, create a file with extension .css

Replace the font with whatever you had before.
The font size you can replace with a number but I think it's better to stick with xx-small, x-small, small, large, x-large and xx-large

Then set the file as your stylesheet.

To simply delete this preference pane demonstrates the extreme hubris now of the Safari dev team at Apple.

The days of Apple giving a crap about user choice are past. It seems now about dogmatic enforcement of design compliance across the platform.

So depressing Apple has come to this.


Very soon this site will be famous among all blog viewers, due to it's fastidious articles netflix member login

Darren Mahaffy
Currently in IT field. Former Managing Editor of MacSurfer and TechNN. This is my personal blog and does not necessarily reflect the views of MacSurfer or TechNN's Publisher or Staff.