SteerMouse is an alternative, fully-customizable application/driver for your USB or Bluetooth mouse.

The included software with the Logitech VX Rev., is a joke. Logitech should be ashamed to put out such a second-rate app with such good mice. They should fix their software or consider bundling SteerMouse with their mice. Attempting to use Logitech's software was a comedy of errors and resulted in erratic mouse behavior, not to mention the lack of button customization.

Using the built-in mouse driver for OS X was not an option with this mouse. With other simple mice, OS X's driver worked fine, but the form factor of the VX Rev was a perfect fit for my hand, and small enough to use on the palm rest on my PowerBook. I was not going to return the mouse just because Logitech's driver was terrible, and OS X's wouldn't work.

So after some digging I came across SteerMouse and promptly downloaded a 30 day trial from MacUpdate. I couldn't have been happier. Out of the .dmg "box" SteerMouse worked like a champ.

Installation is simple and smooth. 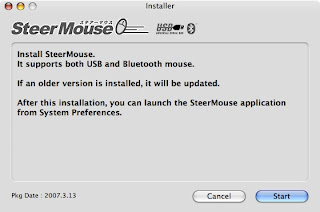 Once your Mac has rebooted, simply go to the System Preferences app, look under "Other" (bottom section) and look for the SteerMouse icon. It is a yellow "bumper-car" looking mouse. 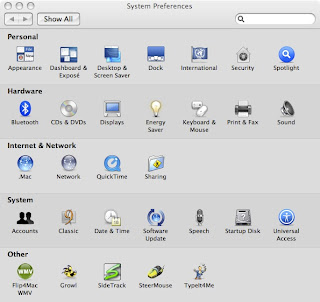 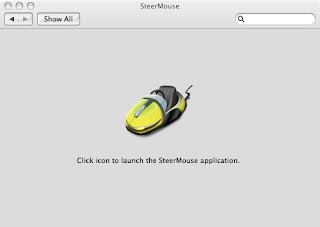 Clicking the icon opens a separate SteerMouse (hereafter, "SM") application. This behavior of having a launcher of sorts in System Preferences is similar to Microsoft, USB Overdrive, etc.

Below are screenshots of each tab in the SM application. 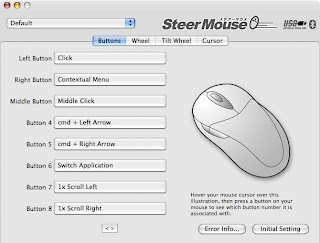 A note here, as you look at the image above, you'll see the pull-down menu which shows "Default". Pulling it down shows the following screen shot (w/out the additonal apps until you add them). 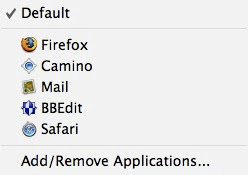 This menu is where you'll find the option to "Add/Remove" individual apps and tweak some or all mouse settings in the chosen app. I changed settings for certain actions in BBEdit that I did not wish to take place in all apps. Additionally, I set up specific keystrokes when in Firefox, Safari, or Camino.

Thus each mouse button can be customized. When clicking the elongated button associated with a particular mouse button, you see the following pop-up menu: 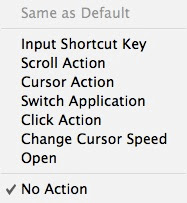 Input Shortcut Key allows you to set the particular button with a key command - it could be any key on the keyboard or a combination there of. Modifiers can also be used: command, shift, option or control keys.

Scroll Action lets you assign the scrolling speed to a button.

Cursor Action will move the cursor to the blinking button, or just about any other button including the close, minimize, zoom, Apple menu, etc.

Open allows you to either open a file or folder, including an executable-upon-open file like an AppleScript application

No Action - disable a button altogether 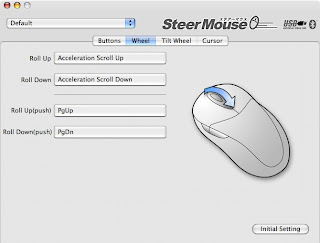 Here you can tweak the acceleration when scrolling. 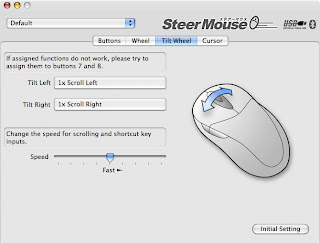 The Tilt Wheel settings were fine out of the box for me; however, one can get pretty granular in settings here.

And I should point out that when I tried USB Overdrive, oddly my right tilt would work only when I pressed hard right on the wheel to elicit the proper side-scrolling response. After switching to SM, this behavior went away and I only need a gentle right tilt and the response is immediate. 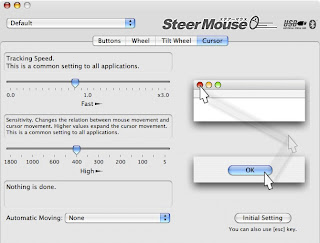 I do not use any automated pointer moving, so I set this to "None". As for tracking speed, this is a nicely customizable option for those who are switchers (or not) and desire faster mouse speeds from Windows days will enjoy the tweaking possibilities.

SteerMouse came to my rescue and gave me full use of my VX Revolution, and is the only alternative mouse driver/app that gave me full use of every button on my mouse, including the "magnify" button behind the scroll wheel. Additonally, I found SteerMouse to have the best, smoothest scrolling/acceleration behavior.

For some the $20 price tag may be high, especially if an expensive mouse is part of the equation. But if you purchased a Logitech, Apple Mighty Mouse, or a Bluetooth mouse and love it but not the included software, or limited functionality, then this is $20 well spent.

Anyone looking for full functionality of their mouse should take a serious look at SteerMouse.

This is well-written software which, like Apple products, "just works".
Posted by Darren Mahaffy at 10:30 AM

Email ThisBlogThis!Share to TwitterShare to FacebookShare to Pinterest
Labels: Reviews

nice article, im trying to set up my vx revolution with Steermouse too. How do you assign the search button to spotlight and get the zoom button to work

Unfortunately, I haven't been able to get the little zoom button working in Steermouse...

Actually, I should amend my reply above - the magnify button DID work, but no longer does. I do not recall when it stopped.

And, for the record, my VX Rev. did end up getting rather soaked one day. After a full dry out period in a zip-loc bag with silica gel it came back to life, sort of. While working fine for the most part now, I suspect its life has been shortened by the experience.

So yes, the magnify button worked, but no longer does.

Someone can tell me how to subscribe this blog, please! I want to update news daily for my website: https://xuongmunon.blueseaco.vn.

Darren Mahaffy
Currently in IT field. Former Managing Editor of MacSurfer and TechNN. This is my personal blog and does not necessarily reflect the views of MacSurfer or TechNN's Publisher or Staff.